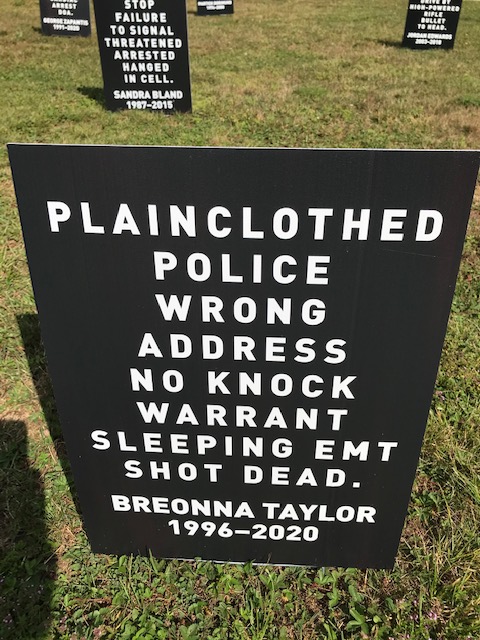 A young Black man, a dancer with the Elisa Monte Dance company of Harlem, encountered that sign on a recent visit to the John Brown Farm, a state historic site where the 19th-century abolitionist is buried.

“I watched this young man collapse to the ground, sobbing as he read the memorial markers,” recalled Martha Swan, executive director of John Brown Lives!, an education and human rights project based at the farm. She walked over and gently touched his hand in a comforting gesture.

The young man buried his head in Swan’s shoulder and wept.

There are 50 of these markers, resembling tombstones, arrayed in the grass around a bronze statue of John Brown. They stop you in your tracks.

I visited the John Brown Farm last month with my wife, Mary, during a weekend stay in nearby Saranac Lake. We were moved to tears by the silent force of the Memorial Field for Black Lives.

The experience appears to be even more intense for people of color.

“When you read those names one after another, it is an incredibly powerful and painful experience, particularly for Black people,” said Tiffany Rea-Fisher, artistic director of the Elisa Monte Dance company, in residence this summer at the Lake Placid Center for the Arts. “The memorial field is an intense reminder that everyday events can turn into a body count if you are Black.”

Rea-Fisher and 11 dancers filmed a dance piece at the John Brown Farm last month for a film that connects the  abolitionist with today’s Black Lives Matter movement across the centuries of an ongoing struggle for racial equality.

It was Rea-Fisher’s first visit to the farm after coming to Lake Placid for a summer dance residency for the past 16 years.

“I was floored that I never knew about the John Brown Farm since it’s so close to Lake Placid,” she said. “George Floyd’s death made people more empowered to do something and to realize it’s not just a Black issue. Racism is an issue that must be faced by all Americans.”

John Brown was a radical white abolitionist who led a predawn raid of 21 fighters on Oct. 17, 1859, on Harpers Ferry, Va., that included capturing prominent citizens and seizing a federal armory and arsenal. His plan was to arm like-minded freedom fighters and slaves who would create a mass uprising. The plan failed and a federal force under the command of Col. Robert E. Lee stormed the fighters, killing many and capturing the leader.

Brown was hanged for treason, murder and slave insurrection on Dec. 2, 1859. He was buried on his family farm in North Elba on the outskirts of Lake Placid.

Brown was drawn to the Adirondacks by abolitionist and philanthropist Gerrit Smith, who gave away 120,000 acres in 40-acre parcels beginning in 1846 to 3,000 poor and landless free Black men willing to farm in the flinty soil of the North Country. The property giveaway was meant to help Black men meet the state’s requirement of property ownership for voting rights. Some referred to this Black settlement as Timbuctoo, the spelling of which is a variant on Timbuktu, the city in Mali that for centuries has been a center of trade and scholarship.

Archaeologists continue to search for remnants of settlers’ cabins in the Adirondacks. A lack of physical objects and racist attitudes conspired to cause that chapter in Adirondack history to be largely forgotten.

The display was installed at a fraught time for race relations in the Adirondacks. Police are investigating racist graffiti spray painted on a bridge in Saranac Lake that is along the exercise route of  Nicole Hylton-Patterson, a Black woman who is the inaugural director of the Adirondack Diversity Initiative. Earlier this month, State Police confirmed the troopers reopened an investigation into an off-duty Cohoes police officer’s claim he was shot at by a Black man.

A heightened awareness of Black history in this time of reckoning is helping to revive interest in John Brown and Timbuctoo.

“I heard one visitor who said John Brown was the original Black Lives Matter activist,” said Brendan Mills, interpretive program assistant at the state historic site. “We try to educate people and set the record straight about John Brown because there is so much disinformation about him.”

“Visitors ask me all the time if John Brown was crazy,” Mill said. “I say he was a sane man dealing with the insane system of slavery.”

There has been an increase in visitors to the John Brown Farm this summer, some drawn to the Memorial Field for Black Lives. The installation opened on June 19, known as Juneteenth or Emancipation Day, an annual commemoration of emancipation celebrated in the Black community since June 19, 1865. It creates a continuum from Brown’s and Smith’s 19th-century efforts to abolish slavery and the work of today’s activists to overcome systemic racism in the 21st century.

The memorial field will be on display through Nov. 1, when the farm’s buildings close for the winter, although the grounds are open year-round.

“I started with one sign for Breonna Taylor and one for George Floyd and I became galvanized to research the incontrovertible truths of these wrongful deaths,” said Karen Davidson Seward, a Lake Placid artist and book designer who created the memorial field. “I could not think of a better place for the exhibit than the John Brown Farm. It’s sobering to see how polarized we remain today about racial justice.”

Last week, Seward visited the farm with Amy Godine, a writer and Adirondack historian who collaborated with Seward on “Dreaming of Timbuctoo,” a permanent exhibit at the farm that details Smith’s effort to create a colony of Black farmers in Essex and Franklin counties. They met a young woman who lives locally, the daughter of a Black father and white mother. “

She explained some harsh realities about white supremacy in the North Country today,” Seward said.

As part of the memorial field project, Swan held readings of a speech delivered by Frederick Douglass on July 5, 1852 in Rochester titled “What to the Slave is the Fourth of July?” She also organized an Aug. 29 performance at the memorial field by jazz violinist Charlie Burnham, “The Violin Vigil for Black Lives,” dedicated to 23-year-old Elijah McClain, who played the violin to stray cats to soothe them. McClain died in August 2019 after police in Aurora, Colo, restrained him with a chokehold as he was walking home from a convenience store and someone called 911 because he looked suspicious. McClain’s death inspired spontaneous violin vigils around the country.

Filmmaker Paul Miller, of Bethlehem, who is completing a documentary about Timbuctoo, finds a strong linkage between the Black settlers of the 1850s Adirondacks and today’s Black Lives Matter activists. “But as a person of color, it is dispiriting to see that we’re still fighting the same battle more than 170 years later,” he said

Miller plans to include footage of Black Lives Matter demonstrations and the memorial field’s signs like this one: Handcuffed Man. Face Down on Ground. Police Knee Pinned Neck. “I Can’t Breathe.” George Floyd 1974-2020.

Paul Grondahl is director of the New York State Writers Institute at the University at Albany and a former Times Union reporter. He can be reached at grondahlpaul@gmail.com