Music With a Message

Music With a Message 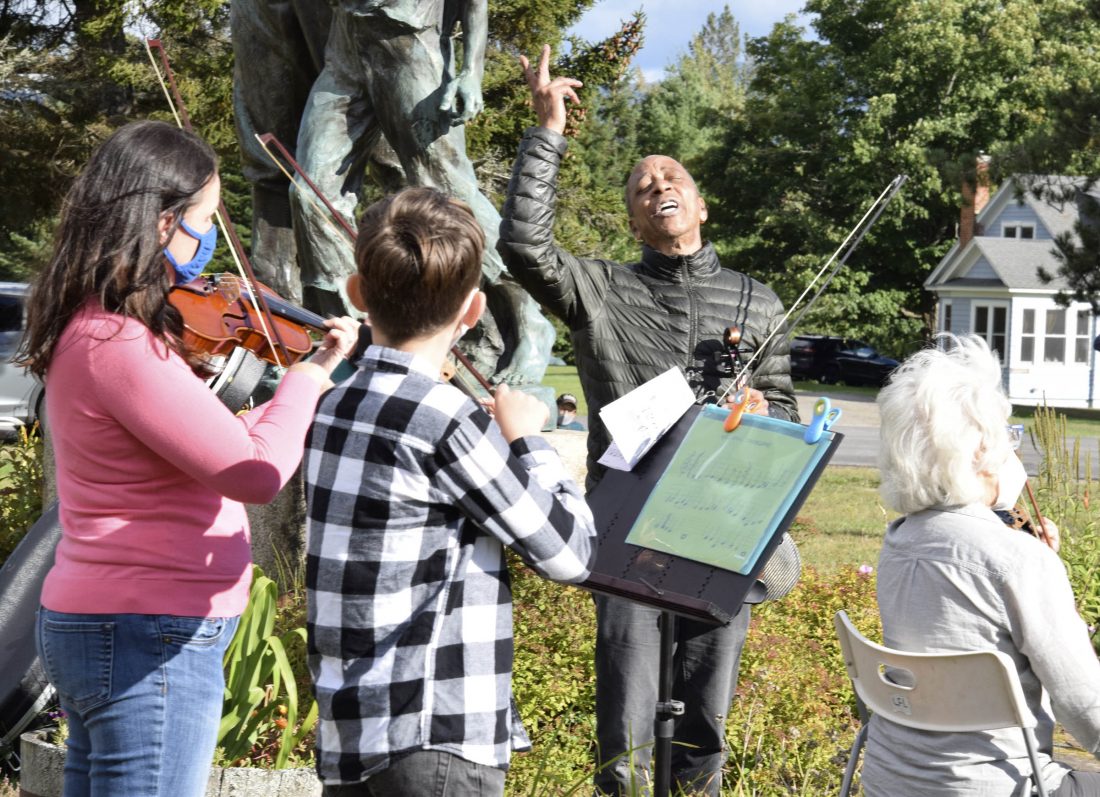 LAKE PLACID — People in the Adirondacks didn’t hear much about Elijah McClain when he died after police forcibly detained him in his Colorado hometown, but one year later, on Sunday afternoon, numerous people commemorated him at an outdoor concert by violinist Charlie Burnham.

About 150 people attended a Violin Vigil for Black Lives at the John Brown Farm State Historic Site, according to a count by Lake Placid News columnist Naj Wikoff. John Brown Lives, the nonprofit group that organized the event, had announced that no more than 50 people could attend, but about three times that number showed up. The attendees wore masks and spread out on the lawn in groups 6 feet apart, and organizers asked that they sign in so contact tracing could be done later, if necessary.

The concert took place in front of the statue of the fiery abolitionist John Brown, around which Karen Davidson of Saranac Lake has designed and arranged markers for Black people allegedly killed by police brutality.

McClain was a violinist who was known to play his instrument for animals at a local shelter — hence the Violin Vigil held in his honor Sunday. Burnham called McClain’s death “heartbreaking.”

Burnham is a native of New York City known for his passionate violin playing. He has played with numerous famous musicians including James “Blood” Ulmer, Cassandra Wilson, Living Colour and Norah Jones. He has performed locally at the Upper Jay Art Center with the band Semi-Free. On Sunday he was accompanied only by Fred Cash on electric bass, and the show focused more on a social message than on the instrumental virtuosity Burnham is known for. Songs ranged from a spare take on Stevie Wonder’s “Love’s in Need of Love Today” to a sing-along on Woody Guthrie’s “This Land is Your Land.”

Part of the concert was a “Community String Along” in which at least a dozen local string musicians — mostly violinists but also some on cello, guitar and banjo — joined Burnham and Cash on three traditional songs: “Let My People Go,” We Shall Overcome” and “Amazing Grace.”

McClain, a 23-year-old Black man, was walking home on Aug. 24, 2019, in Aurora, Colorado, when someone called 911 saying he seemed “sketchy” because he was wearing a ski mask and waving his arms. Friends later said McClain was probably moving to the music he was listening to in his earbuds. He was unarmed and was not accused of any crime.

The situation became tense as soon as three police officers stopped him. He told them to leave him alone, and they pressed him to the ground and put him in a carotid chokehold, which partly cuts off breathing but does not prevent someone from talking. His last words, captured on policy body camera footage, have been widely circulated: “I can’t breathe. I have my ID right here. My name is Elijah McClain. That’s my house. I was just going home. I’m an introvert. I’m just different. That’s all. I’m so sorry. I have no gun. I don’t do that stuff. I don’t do any fighting. Why are you attacking me? I don’t even kill flies! I don’t eat meat! But I don’t judge people, I don’t judge people who do eat meat. Forgive me. All I was trying to do was become better. I will do it. I will do anything. Sacrifice my identity, I’ll do it. You all are phenomenal. You are beautiful, and I love you. Try to forgive me. I’m a mood Gemini. I’m sorry. I’m so sorry. Ow, that really hurt! You are all very strong. Teamwork makes the dream work. (Vomits) Oh, I’m sorry, I wasn’t trying to do that. I just can’t breathe correctly.”

Police said on the body camera footage that McClain fought them with “crazy” strength and was clearly on some kind of drug. Paramedics later gave him a dose of ketamine to sedate him. He went into cardiac arrest in the ambulance and later died in a hospital. His cause of death remains undetermined.

The three officers were not charged criminally, but this July they were fired for photos taken in October 2019 at the scene of McClain’s restraint, where they posed in ways deemed inappropriate and reenacted the carotid restraint used on McClain.