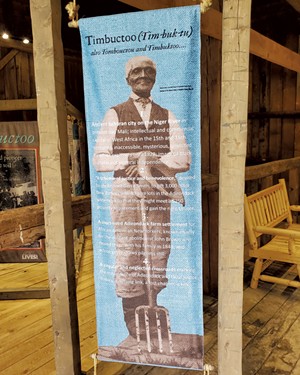 Many elements of history lie hidden amid family heirlooms. Katherine Butler Jones, a Black woman from Massachusetts, was going through some family documents more than two decades ago when she came upon the original marriage certificate of her great-great-grandparents.

Familiar with Black history, Jones recognized the name of the minister who had married the couple: Henry Highland Garnet (1815-1882), a prominent Black abolitionist and orator who was based in Troy, N.Y., when he officiated the marriage.

Jones’ discovery led her on a deep dive into her family’s past. She learned that her great-great-grandparents were among 3,000 free Black New Yorkers who were each given 40 acres of land to farm in the Adirondack Mountains. The land grants were an effort by abolitionists to secure voting rights for Black men in New York State.

Jones published an article on her discoveries in a 1998 issue of Orion magazine, which Vermonter Martha Swan happened to read. Swan is founder and executive director of the educational and human rights nonprofit John Brown Lives!, based in Westport, N.Y.

It “struck a chord,” said Swan, and made her completely rethink her understanding of the presence of Black Americans in this region. Her organization consulted with Jones to create “Dreaming of Timbuctoo,” an exhibit based on the lives of the Black homesteaders Jones had researched.

The exhibit is permanently housed at the John Brown Farm State Historic Site in Lake Placid, N.Y., but a traveling installation opens this weekend at the Town Hall Theater in Middlebury. The free exhibit runs through October.

Swan will lead a panel discussion at the exhibit’s opening event on Sunday, August 22. Other panel members will include Lindsay Houpt-Varner, director of the Rokeby Museum in Ferrisburgh; Benita Law-Diao, a community and environmental activist and John Brown Lives! board member; and filmmaker Paul Miller, who directed and produced the documentary Searching for Timbuctoo.

Though none of the land grants occurred in Vermont, historian Amy Godine, the exhibit’s curator, will explore the Vermont connections in a lecture later this summer or fall.

In a phone conversation with Seven Days last week, Swan noted the historic relevance of these homesteaders’ lives and parallels to political events today, from the Black Lives Matter movement to the subversion of voter rights for people of color.

As Swan explained, beginning in 1846, the Black homesteaders were deeded 120,000 acres of land in upstate New York by Gerrit Smith (1797-1874), a wealthy white landowner and abolitionist. In the pre-Civil War era, New York lawmakers were trying to subvert the Black vote by requiring that each Black person own at least $250 worth of property to register to vote. Working with Garnet, Frederick Douglass and other social reformers, Smith sent his agents throughout the state to recruit free Black men to settle in the North Country.

Ultimately, the settlers never founded lasting towns or villages, nor do any of their descendants still own the deeded land, Swan said. Nevertheless, remnants of their presence remain, including an area near Loon Lake called Blacksville and archaeological efforts to unearth artifacts from their farms, Swan said.

Seven Days spoke with Swan about the exhibit’s name, why most grantees never farmed and how the exhibit surprised her.

SEVEN DAYS: What is the origin of the exhibit’s name, “Dreaming of Timbuctoo?”

MARTHA SWAN: We came across two items of correspondence from the late 1840s where the mailing address names “Timbuctoo, North Elba,” which is the town Lake Placid is in. One was from one of the Black settlers to John Brown, the other from John Brown or his son. So there’s documentation that these loosely connected homesteads self-identified as Timbuctoo.

Why was that? We’ll never know for sure, but we can conjecture. Timbuctoo was a magnificent, fabled center of commerce, learning, vibrancy, intellectual scholarship and religious tolerance in Mali in West Africa. It was a real place. So it’s not hard to imagine the source of pride and connection to Africa that that name could have meant for people.

SD: Most of the grantees never farmed their 40-acre plots of land. Why not?

MS: Just consider it. It’s 1846, and you live with your family in Albany or Syracuse or Long Island. You’re part of a community. Your life and livelihood are all there. The idea that you’re going to pack up and move to a place called the Adirondacks and carve out a new life in the wilderness might have been a little unappealing. To have the deed and title to the land was another story. Amy Godine, the exhibit’s curator, found that holding on to the title [held] an abiding value for these grantees right into the early 1900s.

The other thing was that these recipients of land often were the most upstanding and temperate members of their community. In many cases, the agents of Gerrit Smith sought out the crème de la crème, people who would have been valued members of their community — the barber, the grocer, the physician, the pastor — who would be leaving all that behind.

SD: Were the Black settlers welcomed by their white neighbors?

MS: I think they had mixed experiences. Some of these Black settlers were cautioned about land surveyors who might try to rip them off. Abolitionist John Brown moved his family here because of these Black settlements. He followed these Black settlers, in a sense. When I learned that, I had to confront how I have been taught, overtly and not so overtly, that whiteness is the center of all of our history. And that was a bit of a shake-up.

SD: For you, what was the most surprising component of this exhibit?

MS: That this is an extraordinary piece of history and that, basically, nobody knew about it. And mostly, people still don’t know about it. It’s yet another example of the stories and history that are at our fingertips, and under our feet, that have been either neglected or distorted — and perpetuate national myths that American history is white history. This is a 175-year-old story, but the issues it addresses are still so relevant today.

This interview has been edited and condensed for clarity and length.