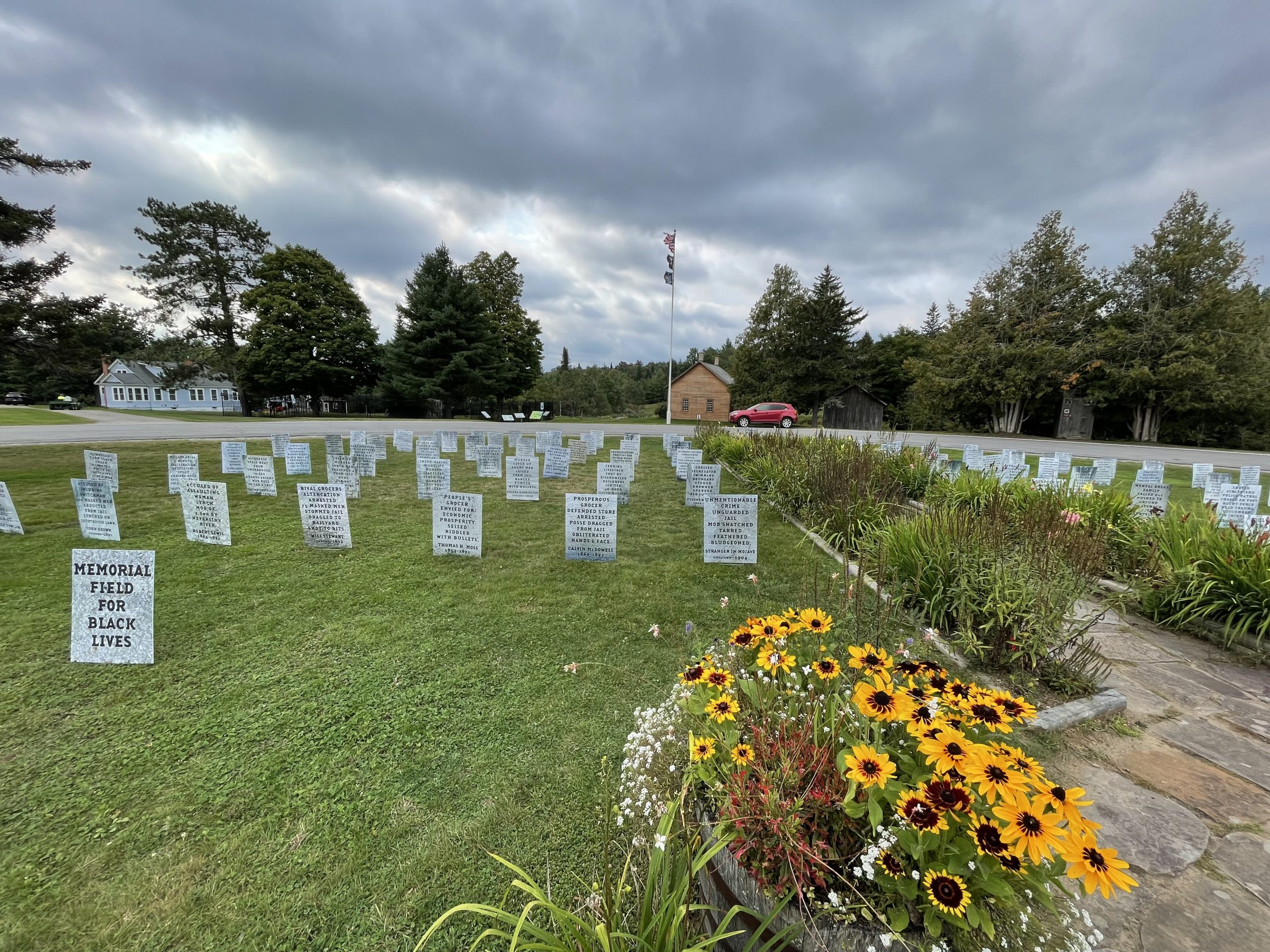 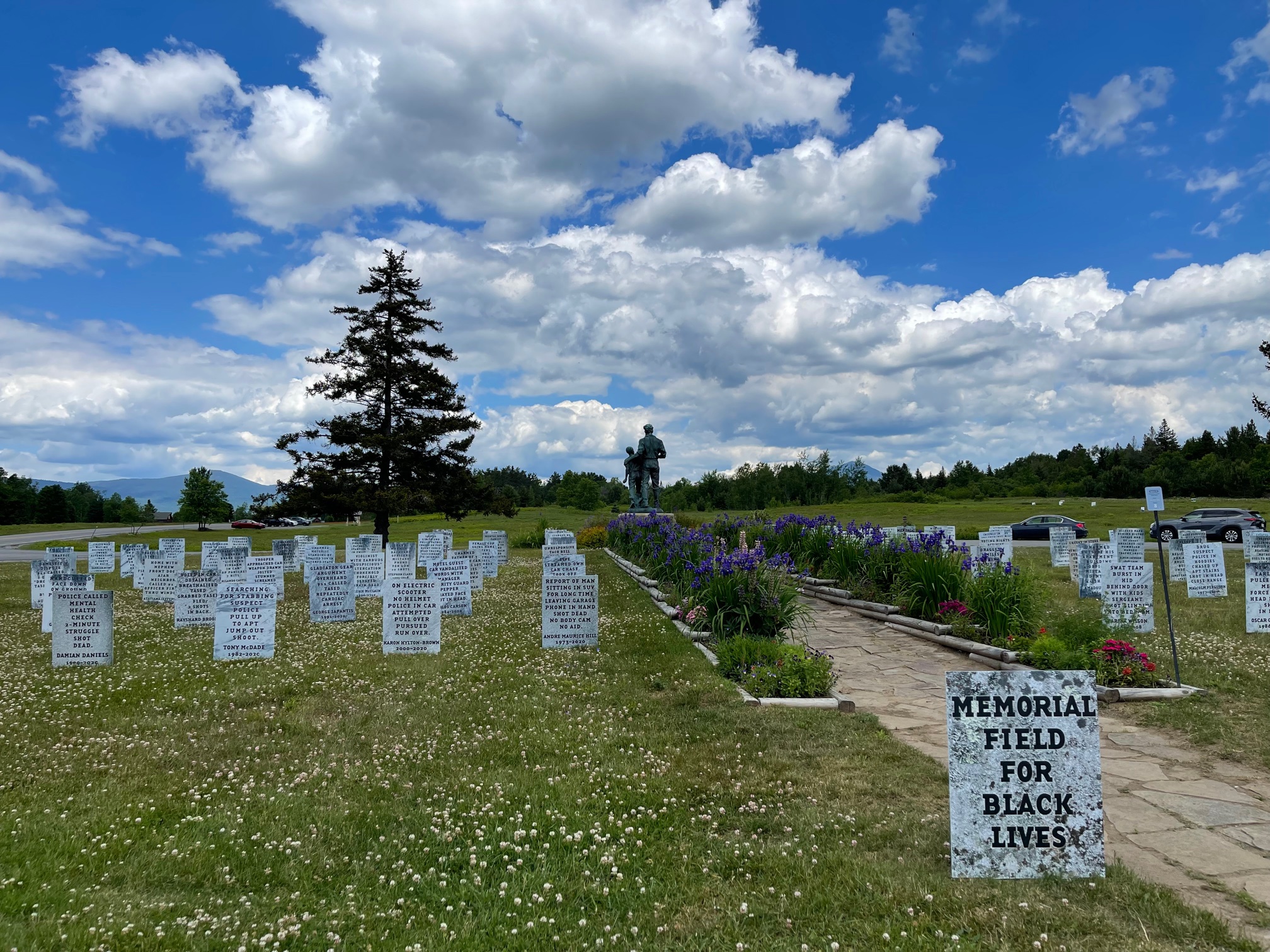 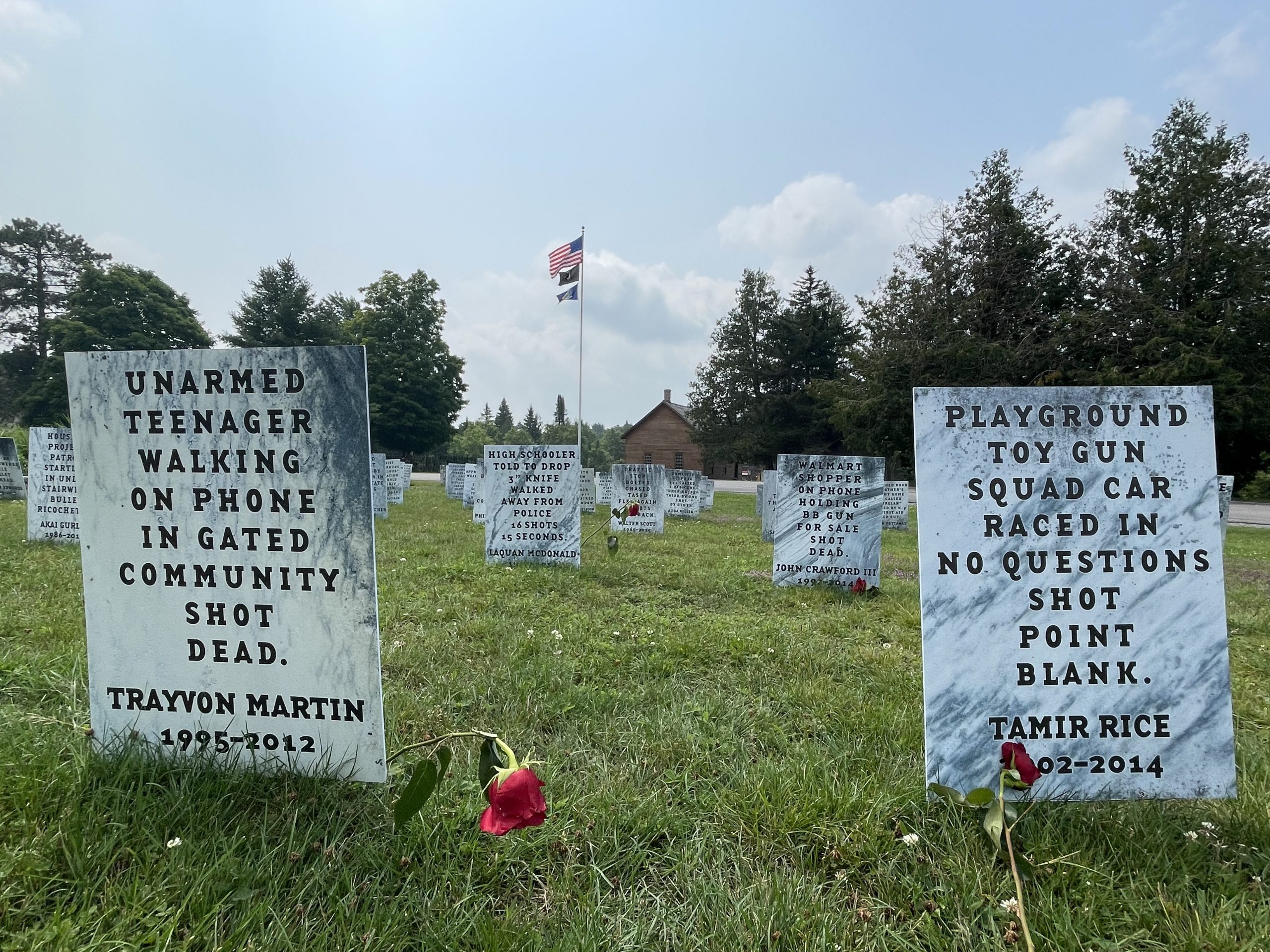 What Is the Memorial Field for Black Lives?

The Memorial Field mourns the violence that permeates the Black experience in America. It sheds light on criminal justice failures. Ren Davidson Seward, the artist and author, writes factual epitaphs to commemorate the unjustly fallen in the uncivil war that has existed between Americans since the slave liberation movement began.

What Does the Memorial Have to Do with John Brown?

John Brown was an abolitionist who believed in racial equality and sacrificed his life to end the moral wrong of slavery. Drawing inspiration from Brown, JBL! promotes social justice and human rights through reflection and activism, awareness and exploration, allyship and action. JBL! believes that today’s Black Lives Movement aligns with Brown’s beliefs that Black people do not deserve nor should they accept inequality based on race.

“A contribution to truth, an array of facts, the perusal of which it is hoped will stimulate this great American Republic to demand that justice be done, though the heavens fall.” —Ida B. Wells, 1892

Rededication of the Memorial Field for Black Lives Remarks

Grave challenges confront us. What looms in our future? America’s widespread civil unrest is uneasy. Dashed promises of equality…. after the Civil War…. after Emancipation… after we learn that the evidence of the Tulsa massacre was burned in 1921 and the truth hidden for 100 years…  after the civil rights movement of the 1960s… after the Voting Rights Act of 1965 was overturned… after Congress failed to pass federal anti-lynching bills in spite of hundreds of requests for action from seven presidents. After a 2005 Senate apology to African-Americans declared that “protection from lynching was the minimum and most basic of federal responsibilities” toward its citizens. That apology is gutted every time there is unchecked police violence.

According to the Equal Justice Initiative in Montgomery, Alabama, more than 4,400 racially motivated lynchings took place in the U.S. between the end of Reconstruction in 1877 and 1950. Mobs—most commonly in the South, but also in the North—played judge, jury, and executioner. Law enforcement carries on this practice in every state in our nation. Killed for turning away in terror. Killed for prospering. Killed to cover up crimes committed by Whites. Killed for a traffic violation. Killed on a hunch.

In March of 1892, Ida B. Wells wrote an article entitled, “Crusade for Justice.” In it she described her beloved friend, Thomas Moss, “A finer, cleaner man than he never walked the streets of Memphis. He was well liked, a favorite with everybody; yet he was murdered with no more consideration than if he had been a dog….”

Wells explained what happened, “Tommie co-owned People’s Grocery with Will Stewart and Calvin McDowell. Their business was in a mixed race neighborhood called the Curve… Across the street was another grocery owned by a white man, William Barrett. His store was closed by court order for whiskey and gambling. Barret found cause to blame his rivals for his misfortune and trumped up rumors which sent a large group of armed white men into People’s Grocery. Gunshots led to injuries and the three black grocers, all family men, were arrested and jailed.

Three days later, at 3 a.m., the jailer slept while a mob of 75 … rushed through the downtown jail corridors … accessed keys to the cell of Stewart, Moss and McDowell, bound them, dragged them out and took them a half mile to a deserted field near the Chesapeake and Ohio rail yards. The three fought for their lives before being shot and left under a pile of brush.

Wells admitted, “The colored people feel that every white man in Memphis who consented in [Thomas Moss’s] death is as guilty as those who fired the guns which took his life. …with the aid of the city and county authorities and the daily papers, that white grocer had indeed put an end to his rival Negro grocer as well as to his business.”

For this, her newspaper office was torched while she was out of town and her life threatened. Wells moved on and founded the NAACP in New York.

2015, the mass murder at the historic Emmanuel ME Church, in Charleston, South Carolina. Reverend Sharon Risher lost 3 family members that day. Afterward she described herself as an ‘accidental activist.’  “The need to lift ourselves out of grief so we don’t get bogged down carrying that ache in our hearts. . . I have better stuff to do,” she said.

We each have better stuff to do. Yet we are called for duty because, as Wells acknowledged over 100 years ago, we can’t carry this kind of weight on our spirit.

Another man in the Memorial Field was accused of injuring a switchman on an Illinois Central Railroad train in Jackson, Tennessee in 1891. He was jailed until an angry mob of masked Americans took the law into their own hands. His name happened to be John Brown.

I don’t know whether or not his namesake was the John Brown who lies buried here at his farm in Lake Placid. I don’t know if he was dragged off that train because his name was John Brown.

In society, we commemorate through remembrances.

We name our children.

We say their names.

We erect statues (and tear some down).

We make land acknowledgements to the Haudenoshaunee, the indigenous inhabitants of the Adirondacks, to show the respect due to their sovereignty that has historically been invalidated.

We lobby for ten years for historical markers as did the great-granddaughter of Alex Holley, one of the first killed in the Slocum Texas Massacre in 1910.

We perform ceremonies of liberations for our ancestors.

We gather for violin vigils for the Elijah McClains of the world who are killed for dancing in the streets.

We make commitments to protect and preserve places like John Brown’s Farm as New York State did 125 years ago.

Not every historic site can move our country closer to racial justice, but this one can.

When I am here at John and Mary Brown’s farm, I don’t dwell on John’s controversial warring tactics, even though they were tinder for the entire United States Army to take up his cause only 5 years after John Brown was the first person in our nation’s history to be executed on the charges of treason, murder, and insurrection.

What I think about is who we become when we retell the story of how John Brown’s fervent belief in equality spurred him to make the ultimate sacrifice over a practice so unholy. At his farm, I imagine how the Brown family discussed what actions would be required to shake America out of its complacency, its blindness, its economic model of raising up one by keeping down another… about what actions were warranted to spark the slave liberation movement.

On a visit to two Civil War battlefields last week in Tennessee, the historian at the Carter House Museum brought the fury of the bitter frontal assault at Franklin to life with words. The battle took place on November 30, 1864. The crack of canonballs, the pop of guns, the snap of bones… wave after wave of counter assaults… the visceral reality of hand to hand combat as chaos intensified. Under a moonless sky, air thick with gunpowder smoke, the dark, mud-covered uniforms of the United States Army and the Confederate States Army were rendered indistinguishable from one another. Not until face to face, bayonets down in hand-to-hand combat, were the soldiers able to make out that they were killing some of their own in the minutes and hours of one of the bloodiest battles that turned the tide of the Civil War toward justice for all Americans.

Like John Brown, thousands of soldiers who died at the battle of Franklin believed that our Union is indestructible if we do the right thing.

I am indebted to Martha Swan, Tiffany Rea-Fisher and her dancers, Archie the Activist, Daniel McKay, Yolanda Bostic Williams, Lavada Nahon, Alane Ball Chinian, Commissioner Kulleseid and all at the NYS Office of Parks, Recreation and Historic Preservation who endorsed the installation of the Memorial Field for Black Lives at the John Brown Farm State Historic Site for a second year in a row.

I dedicate the Memorial Field for Black Lives to Ida B. Wells whose words from 1892 Inspire me to this work. “…A contribution to truth, an array of facts, the perusal of which it is hoped will stimulate this great American Republic to demand that justice be done… though the heavens fall.”

In turn, Frederick Douglass wrote to Wells, “You have dealt with the facts with cool, painstaking fidelity and left those naked and uncontradicted facts to speak for themselves.”

No epitaph on a memorial can match the injustice of these deaths, but for me, words carry weight. When raw facts are confronted unflinchingly, they get inside us, and something happens.

Please join in a moment of silence for all who have unjustly fallen in this uncivil war.

Ida B. Wells, Southern Horrors: Lynch Law in All Its Phases (1892) and her article, “AROUSE OUR CONSCIENCE.”

Born a slave, verbalized her position against lynching in her Memphis newspaper, The Free Speech. She moved to New York where she founded the NAACP.

Thomas Moss was asked if he had any final words. “Tell my people to go west. There is no justice for them here.”

Alex Holley, Slocum Massacre, Anderson County, Texas July 29, 1910.
Born a slave, eventually owned a dairy, a granary, a general store, and 700 acres of land—land that was taken over by white residents after his survivors scattered, never to return.
His great-granddaughter, Constance Hollie-Jawaid said, “Every year, family members return to Slocum to perform a ceremony of liberations for their ancestors.”  It took her nearly ten years, but in 2015 the importance of her family’s place became honored by a historical marker.

Lessie Benningfield Randle, the 106-year-old survivor of the Tulsa Race Massacre said recently, “Justice in America is always so slow, or not possible for Black people. And we are made to feel crazy just for asking for things to be made right.”
https://www.encyclopedia.com/social-sciences-and-law/law/crime-and-law-enforcement/lynching

The historian at Carter House didn’t parse which side lost more soldiers. He made meaning by tallying all lost that day and calling all of them one thing… Americans.